Before Chris Weidman sank the Anderson Silva showboat, he attempted a kneebar to heel hook combination. The particular entry that Weidman used is not terribly common in MMA, and I’ve seen a few fans commenting about how it seemed incredibly risky to spin into a leg lock against a jiu-jiteiro of Silva’s caliber.

While the kneebar attempt was a bit of a risk on Weidman’s part, the footage suggests that the kneebar was more of a reaction than a planned attack. In this situation, Weidman didn’t set up the kneebar. He didn’t bait Silva into it or cinch his way into position for the submission. Silva began to use a de la Riva hook to attack Weidman’s hips to off-balance Weidman, motivating Weidman to find a way out of an increasingly dangerous technical corner (watch the full sequence here. Edit: Special thanks to Zombie Prophet for creating the GIF). 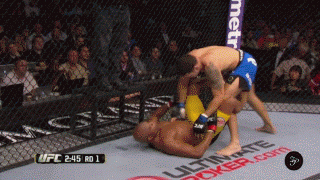 At the start of the exchange, Weidman is standing over Silva. In the above still, Silva is beginning to thread his right leg around Weidman’s left leg. This is the beginnings of a de la Riva hook. In jiu-jitsu, a de la Riva guard is a powerful position for off-balancing your opponent that is primarily used for sweeps, but the position can also lead to submissions and back-takes.

The position derives much of its power by the way it compromises the strength and mobility of an opponent’s lead leg, which in turn limits that opponent’s hip mobility. When a de la Riva hook is set, the top person will have great difficulty rotating his knee outward, and stepping forward or backward is difficult because of the way the bottom fighter has threaded his leg. A tight de la Riva guard will exert a steady pressure, forcing the knee to collapse inward. 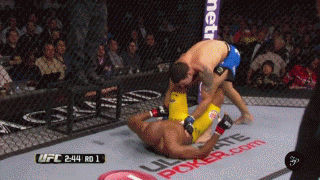 In this next still, Silva has closed the space between Weidman’s foot and his buttocks, he has established wrist control with his left hand, and he has angled his hips slightly to his right, giving him the ability to shoot his  right foot between Weidman’s leg and to the front of his right thigh. In sport jiu-jitsu, this is the beginnings of a back take because the de la Riva hook is exerting immense pressure on Weidman’s left leg, which his body naturally seeks to relieve by rotating the hips with the pressure rather than against. Because of the angle of the de la Riva hook, the hips want to turn away (circling to Weidman’s right), which in turn exposes the back (here is a kneeling version of how this deep de la Riva hook creates an opening for the back take).

With Silva’s de la Riva position growing stronger and stronger, Weidman needs to act to protect his base and his top position.

Weidman’s first choice is to peel the hook loose, which would be tricky even if Silva wasn’t controlling his right wrist, preventing Weidman from posturing up or reaching to fight the hook. Since he can’t unthread the de la Riva hook, Weidman would rather attempt to counter than risk getting swept. For the sake of clarity, I feel I should emphasize this: Weidman’s choise to attack with a kneebar was a signfiicant risk, but we do not know how compromised Weidman felt by the de la Riva hook. 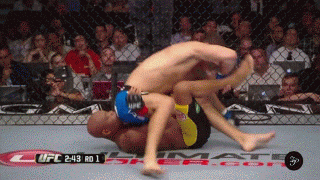 So he steps backward with his right foot, turning Silva’s deep de la Riva hook into a kneebar opportunity. This counter is not unheard of (Marcelo Garcia teaches it on one of his DVDs), but it can be difficult to finish consistently because of its dynamic nature. At the high levels, most of the successful submissions we see occur at close quarters, the result of inching and inching into better and better position until a submission is a wrist flick or hip pop away. The more space that a fighter must close to finish a submission, the greater the likelihood of failure. The attacker can make mistakes, and the defender has more time to protect himself.

This is a bit like hitting a half-court shot versus a lay-up.

In this kneebar entry, Weidman must turn his back and then transition from a standing position to a sitting position if he is to successfully tighten the kneebar. In the above still, you can see that Weidman lands more on Silva’s face than on Silva’s hips. By overshooting the leg, Weidman leaves a great deal of space between his hips and Silva’s. Ideally, Weidman would have landed with his hips connected to Silva’s. In this position, Weidman needs to close that gap and extend the leg. 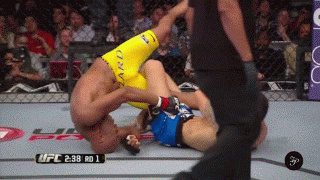 In the ensuing scramble, Weidman succeeds in extending the leg, but he fails to close the space. As you can see in the above close-up of referee booty, most of Silva’s thigh is exposed. With little control over Silva’s hips, Weidman is unable to stop Silva from rotating to relieve the pressure of the kneebar. To be clear, Silva is in some danger here. We have certainly seen fights end in positions like this. It’s just not ideal from a technical standpoint, and Silva knows enough about the ground-game to exploit the cracks in Weidman’s technique. 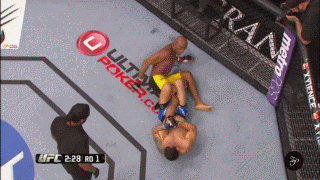 As Silva rotates out of the kneebar, Weidman looks for a heel hook, a common next-step after an attempted kneebar. With his legs triangled around Silva’s right leg, Weidman is pretty well attached to Silva. Weidman, however, again fails to control the hips. While a heel hook is primarily an attack on the knee, successfully finishing it often requires successfully controlling the “free” leg. If the other leg is free to move, it becomes a tool for attack grips and for changing positions (check out how a Sambo specialist addresses this challenge).

So even though Weidman is firmly attached to one leg, Silva still has a tool for escaping. Weidman should be looking to use his right foot to hook Silva’s leg to slow and stifle his ability to rotate by limiting the mobility of Silva’s hips. 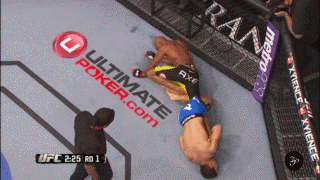 But he doesn’t, and Silva is able to rotate out of the heel hook pressure and pull his leg free.

The lesson to take from this is the importance of battling the hips. Weidman’s initial kneebar attempt stemmed from Silva attacking his hips, and Silva’s subsequent escapes were a result of his hips having the space and mobility to change angles to avoid submission pressure.

Did you like this article? Check out the Artechoke in a Can installments in our archives for more technique, and download the free e-book copy of our new book, Don’t Wear Your Gi to the Bar: And Other Jiu-Jitsu Life Lessons.