Last night at UFC 163, Sergio Moraes overwhelmed Neil Magny’s communication tower with a brutal mounted triangle choke, which you can watch in convenient GIF form thanks to Zombie Prophet. Though the mechanics of the actual finish are fairly clear, this particular avalanche actually began in Magny’s half guard. Moraes, a highly decorated jiu-jiteiro, capitalized on a slight hesitation in Magny’s technique and began increasing his positional dominance until Magny had to tap out.

This is the beginning of the snowball: 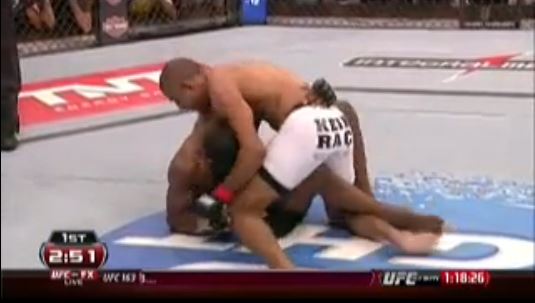 In the above still, Magny has fought his way into establishing his left underhook as Moraes was looking to pass. For Magny, securing the underhook is a huge victory in this position, and it is technically the correct decision. The underhook will theoretically give Magny the leverage that he needs to create space and either recover his guard or transition out of half guard into a takedown attempt or into a stand-up. By the way Magny is sitting up, it looks as though he intends to pursue that latter option: rotating to his hips to attack with a takedown or to stand up.

Note, however, the angle of Magny’s hips. They are pointing toward the ceiling, flat against the mat. Magny needs his escape to be quick and explosive, which requires him to rotate his hips a full 180 degrees if he is to achieve a turtle position or a stand-up. By hesitating here, Magny gives Moraes the opportunity to counter the underhook with a back-step pass. 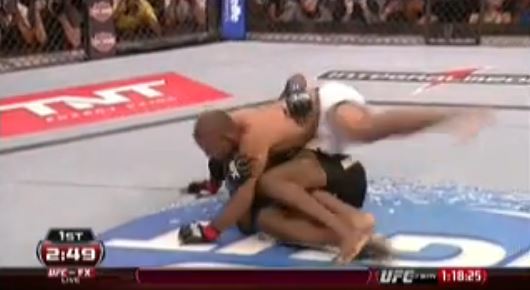 By stepping back over Magny in this way, Moraes is able to neutralize the power of Magny’s underhook by dropping his bodyweight on top of it. This maneuver essentially pins the underhook to the mat, negating the leverage of the position.

The principle of laying on an opponent’s underhook in this way appears in a few other applications, the most common of which is a basic back control escape. When an opponent has the seatbelt (one underhook, one overhook), the conventional escape is to lay on your opponent’s underhook, which helps you to protect your neck while also dramatically limiting your opponent’s mobility. If you aren’t familiar with this technique, you can watch this breakdown courtesy of Brandon Mullins and Stephan Kesting.

In the case of Magny vs. Moraes, the back-step is a counter to an underhook from half guard, giving Moraes the positional advantage he needs to complete a guard pass. This particular pass was possible because Magny was not able to rotate his hips to face the mat quickly enough. Had he succeeded in doing that, Moraes would not have had the angle and control he needed to execute the back-step (if you’d like to learn more about this pass, Marcelo Garcia teaches it in his book). 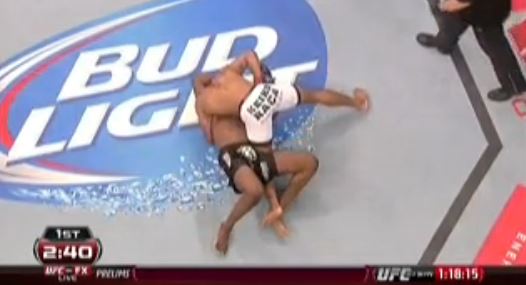 Shortly after the back-step, Moraes frees his right leg and secures an incredibly deep underhook with his left arm, which is pictured above. At this point, Moraes has accumulated multiple positional advantages. He has passed guard. He has set a deep underhook from side control. He is blocking Magny’s hips, preventing him from recovering guard. And he is creating immense downward pressure.

Magny is in a bad way, and he knows it. Both of his arms are vulnerable to submissions, and Moraes could use the position to begin unloading strikes at any moment. Magny bridges and bumps in an attempt to escape but because Moraes’ position is so dominant, the escape attempt is actually an opportunity for Moraes to transition to mount. 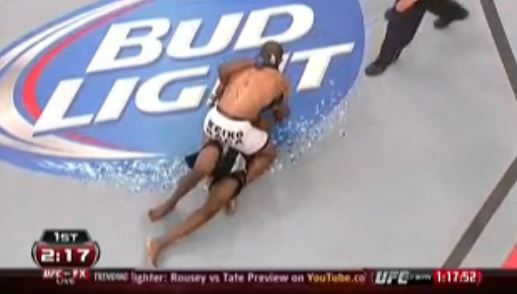 And as you can see, Moraes does just that.

Theoretically, there are safe ways to escape mount. However, certain positions are classified as dominant for a very simple reason: they are difficult to escape. By the time an experienced jiu-jiteiro achieves a position like mount, a lot has already gone wrong for his opponent. The snowball is large, and it’s moving quickly.

The mounted triangle set-up that Moraes uses against Magny is not complicated, but a few key details make it effective. If you look back at the last photo, you can see that Magny has pummeled his right arm into an underhook position. From a purely jiu-jitsu perspective, this is a huge mistake, but in an MMA context this decision is often a product of a perfectly reasonable fear: getting punched and elbowed in the face. With an underhook from the bottom of mount, Magny likely hopes to hug Moraes tightly to avoid strikes and to perhaps bridge and roll into Moraes’ guard. 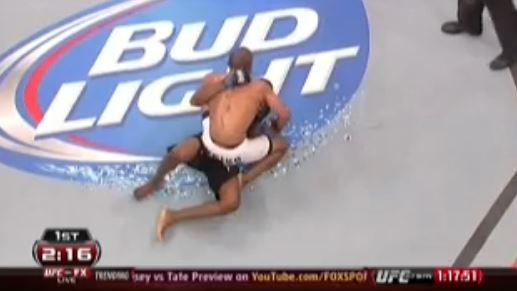 Instead of pursuing strikes, Moraes traps Magny’s right arm by stepping his left leg forward and sucking his left elbow backward toward his hip. By locking Magny’s arm into place, Moraes achieves an even more dominant position. Magny’s right arm is not only useless, but it’s stuck in a sort of bear trap. The trap itself won’t be the end of him, but he is exceptionally vulnerable to other attacks.

Let me emphasize: locking Magny’s right underhook into place with his left leg and left arm is what made this mounted triangle set-up effective for Moraes. 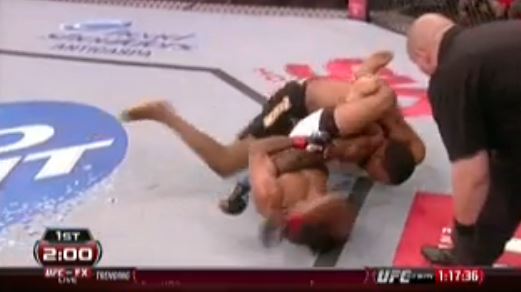 And it’s also why Moraes could not immediately cinch and finish the choke. As you can see in the above photo, Magny uses his right arm to wrap Moraes’ left leg to create space and to relieve the choking pressure of the triangle. In the above still, Moraes is on Magny’s right side. To secure the traditional finish, Moraes wants to be on the other side. Moraes could bridge his hips in an attempt to clear the arm, but with Magny already in deep trouble, he chooses to force Magny’s hand by striking relentlessly from the bottom.

A few other high level jiu-jiteiros have had success with this approach in MMA. In this highlight, for example, you can see Shinya Aoki responding to the exact same scenario with strikes. The opponent is again forced to do the rock and hard place dance. He must choose between defending the choke or defending his head.

Magny stubbornly keeps his right arm in position, but in his attempt to wiggle free he creates the angle that Moraes needs to finish the triangle. 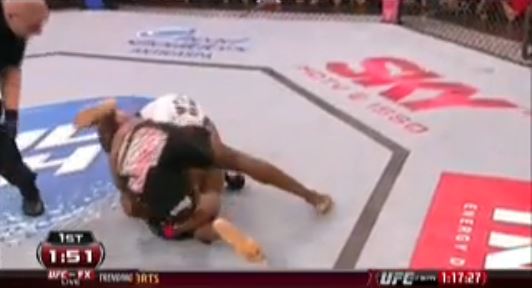 Moraes hooks the leg and allows Magny to roll through the triangle, where Moraes finishes the choke from the top position.

For Magny, the trouble began and ended because of an underhook. That small mistake in half guard, a matter of degrees in his hip rotation, allowed Moraes to accumulate advantage after advantage until the dominance of his position was overwhelming.